Recently we took you through a few ways to capitalize on the bitcoin (COIN) craze without actually investing in it the digital currency directly. A fruitful discussion about cryptos and crypto related investments ensued. A litany of cryptocurrencies were rattled off as potential investments, included litecoin, ethereum, ripple, zcash and bitcoin cash. However, one cryptocurrency was notably absent from the discussion, and has only been touched upon lightly by my colleagues. The purpose of the present column is to introduce our readers to IOTA, which we believe will make substantial moves higher in the coming months as it is somewhat flying under the radar, despite slowly moving its way to the top 100 list of cryptocurrencies over the last few months. We will discuss why the technology is in many ways superior to traditional blockchain technology, and why we think it has a real future.

We mentioned that IOTA is not traditional blockchain technology. You have heard of mining, validation, and transaction fees with blockchain. That doesn’t exist with IOTA. Simply put, the blockchain, in our opinion, will not be a reliable way to conduct billions of transactions a day, given the computing power, speed requirements, and fees, in an economy that is based entirely on digital currency. This may sound extremely ‘futuristic,’ but an economy where goods and services can be paid for and exchanged in a single environment is one key concept of cryptocurrencies. And in the longer-term, the blockchain approach will be inefficient (in large parts due to fees). The Tangle ledger gets around this, and as such IOTA is the first technology that enables real and meaningful micro and nano payments, because there are absolutely no fees, and it is fast. One key advantage here is scale. IOTA can scale up to the highest levels of volume, but blockchain cannot.

For a great description of the differences between blockchain and the Tangle, we strongly recommend viewing this video

The Tangle is a third-generation distributed ledger, which relies upon the directed acyclic graphs, or DAGs. The Tangle is entirely ‘blockless’, and technically, chainless too. Directed Acyclic graphs have been used in a number of applications. We at Quad7Capital are most familiar with their utility in the field of epidemiology, where directed acyclic graphs are utilized to demonstrate confounding, or the mixing of effects, when assessing the relationship between an exposure and an outcome in the presence of several cofactors. How are DAGs utilized in the Tangle network?

Here is where it gets complex, but we will do our best to simplify. For the Tangle DAGs, there are two key terms to be aware of, sites and nodes. The ‘sites’ are the transactions of interest that will be represented by the DAG. The network of connected machines (businesses if you will) is made up of ‘nodes’. So, the nodes are essentially anything or anyone that issues or validates a transaction. The transactions that are being issued/validated by nodes make up the entire site for the Tangle DAG. This is the ‘ledger’ which is documenting the transaction.

Now, here is the beauty of the Tangle when it comes to verifying a transaction. When a new transaction comes in, the technology is set up in a way in which the present transaction must approve two previous transactions. Confusing right? However, this is where a visual of the DAG may help. Here is a simple DAG as shown in the IOTA white paper:

*Note: To avoid being overly technical we opted to omit discussion on weight assessments and scoring; please read the source paper for more on this technical discussion

Source: The Tangle, By Serguei Popov

So, a new transaction comes in and these approvals that are needed are represented by directed arrows or edges, as shown above. As stated in the white paper:

“If there is not a directed [arrow] between transaction A and transaction B, but there is a directed path of length at least two from A to B, we say that A indirectly approves B. There is also the “genesis” transaction, which is approved either directly or indirectly by all other transactions.”

Ok so what is the so-called genesis transaction? This is how the Tangle starts. In the beginning of the Tangle, all of the tokens in the system were at a centralized location. Every token there will ever be has already been created. There will never be “mining” like we see with bitcoin. It cannot happen, as every token is contained in the system. The very first transaction (the genesis) distributed tokens to several addresses. So, as you can see, the Tangle will grow, and grow, and grow, as more and more transactions are made. It may help to look at a simple figure of the start of the Tangle as shown in the white paper:

*Note: To avoid being overly technical we opted to omit discussion on weight assessments and scoring; please read the source paper for more on this technical discussion

Source: The Tangle, By Serguei Popov

Hopefully, the concept of a new transaction approving the prior two should now be more easily understood. When a new transaction occurs the node, through an algorithm, chooses two other transactions to approve, and checks for conflicts (as an example this could mean double spending or double transaction checks). If there are conflicts, there will be no approval. This is where the Tangle and IOTA are similar to blockchain and bitcoin. For a transaction to be approved, the node and the algorithm run through anywhere from hundreds to potentially trillions of combinations to ensure confidence in the transactions being approved.

We realize this explanation of the technology is likely a bit cumbersome, but it is paramount to understanding why IOTA has a potential future in place of bitcoin and the blockchain.

We touched upon some of this above, but the way the technology is set up differentiates it from so many other cryptos out there.

If IOTA becomes even more mainstream, the advantages are clear, and as such, it surpasses the utility of bitcoin and other cryptos.

If you have been able to sift through the technical part of this column surely there are skeptics out there. This would be wise. While advantages 1 to 4 above are true right now, it really needs to start making progress on what we outlined in number 5; expanding the ecosystem. On its own, IOTA won’t get there. The need for micropayments however is real. Imagine the fees eating people’s finances alive if they were constantly moving microfractions of bitcoin. That doesn’t exist with IOTA, but to start building the ecosystem further, IOTA will absolutely need major partners to help build out the system. It simply is not possible on its own.

Very recently IOTA has made some headlines as it appeared that some of these much needed partnerships were seemingly being made. About a week ago, it seemed a major partnership with Microsoft was in the works. In addition, about a dozen other tech companies were identified as partners with IOTA to develop new solutions tied to the Internet of Things, and names like Cisco, Samsung and Volkswagen partnered with the IOTA Foundation around the IOTA Data Marketplace. However, there is controversy here, as Cisco was recently removed as a reference, and this led to questions whether any of this was even real. A very controversial article called into question the partnerships. Dominic Schiener, co-founder of IOTA responded that article directly in the comments to help substantiate and verify some of the ongoings. Just today, IOTA was forced to clarify its partnership with Microsoft. In fact, there is no formal partnership with Microsoft, which is what drove the price of IOTA to surge this month. IOTA is now falling back in price on this news.

This does not mean there is not an ongoing discussion. It seems that in the reporting of the news, at some point, the word participant was not used, and partner was, and this got the gears turning. It certainly sent IOTA higher. However, they are working together, and the statement in the referenced article above clarifying the ‘partnership’ discusses how Microsoft’s Omkar Naik saw the potential in IOTA to go beyond the blockchain to “foster real world solutions.”

As IOTA moves forward, getting buy in from major ‘participants’ could in turn lead to formal partnerships. This is much needed for IOTA to move forward.

Pricing And Our Take

The price of IOTA is currently $4.12 at the time of this writing, and has pulled back about 15% since news of the Microsoft revelations were released: 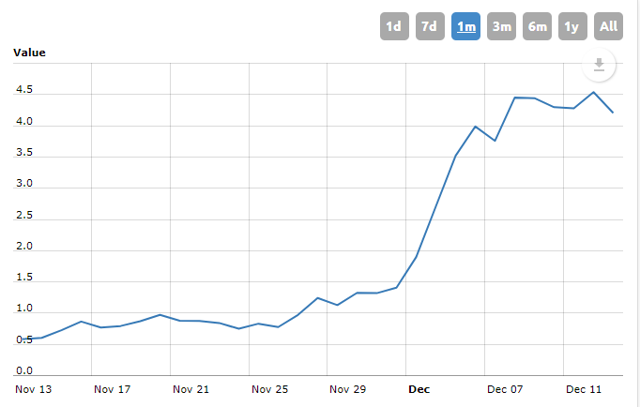 As you can see a major move has occurred this month. We believe it is prudent to let IOTA pullback a bit (as it is currently) before doing any buying. Volatility in cryptos is extremely high, and the risk of purchasing any cryptocurrency is also extremely high. However, since IOTA is not a mainstream as bitcoin yet, it needs to prove itself.

Early buyers have been rewarded, but substantial moves forward are in store if IOTA gains more traction, especially if it enters into real and meaningful partnerships.

IOTA stands apart from many other cryptos as the technology isn’t an extension of blockchain, it is a new ecosystem. There are major advantages of IOTA relative to those using blockchain technology. That said, the inherent risk here is a lack of adoption, and a lack of buy in from the major technology companies that would be needed to help bring IOTA into the mainstream. That said, if you are looking for a revolutionary cryptocurrency, we strongly suggest you research IOTA further.